That's right! Sarasota, Florida, is a grumpy, grumpy city and they're taking it out on Mary Worth. Read more here.
4 comments:

YES! YES! YES! Those cops DO have a steering wheel in the back seat of their car. It is the latest gadget in criminal justice technology. This way, the criminals think you're driving away when you're actually chasing them. Which is ultimately what did Ted in. But I'm getting ahead of myself... 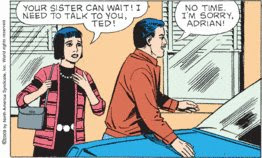 It's been a crazy week in Santa Royale, California. Adrian arrived in the seedy, dark side of town just in time to find her fiance running off with his car tucked under his arm. His excuse? His sister needed him right away. 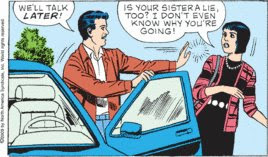 When luring the big con, you want to pick a sucker who is clueless enough to take the bait, but not so clueless that she pulls you out of the boat and into the lake. Even now, Adrian can't fathom why Ted could possibly be getting out of town as fast as possible. 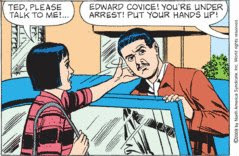 Ultimately, it is her final pleading face touch that delays Ted's departure just long enough for two of Santa Royale's Finest to show up with their really cool lapel badges and read Ted's rap sheet in public. "Hey, listen everybody! Dr. Corey is dating a bigamist!"

Not only is he a liar, a thief and a bigamist, but he's also a DEAD BEAT DAD!

Take him away, boys!

Earth Day 2: The Return of the Pod People 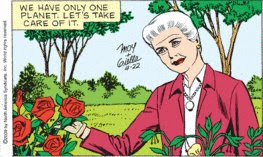 Last year, Mary Worth celebrated Earth Day by chatting on her lithium-powered cellular telephone to a mysterious stranger about a tree she claimed to have planted. But this year she's actually doing something for Earth Day: Touching roses. Something she does on a daily basis already. Oh, and she is also lecturing us. Something she also does on a daily basis. But that's Mary. To her, every day is Earth Day.
34 comments:

Mary Worth 484: Now in a New, Easier to Swallow Serving Size! 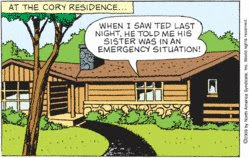 It's been a crazy week in Santa Royale, California. Over at Dr. Jeff Corey's Suburban Man Cabin, Jeff had one of those father daughter discussions that required forty-seven cups of coffee to get through, and when it was over, he was still left on the losing end of his daughter's Oldsmobile. 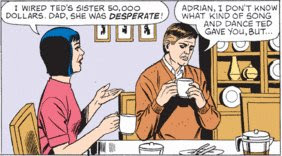 Apparently, Jeff has been doing a little research into Ted's background and has come up with some interesting tidbits. For one thing, Ted is a musical theatre guy, and NOT a photo journalist for Nations Geography Magazine. That explains Ted's mustache and the spell it cast on Adrian. Musical theatre guys are soooo hard to resist, and soooo hard not to give money to. They just start singing, they just start dancing, and suddenly you just start wiring money all over town. They're just soooo talented. 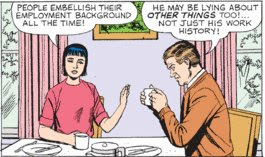 Of course, you know and I know that there's a big difference between lying about your medical credentials so you can get a job at the local hospital, and lying to your fiance about your last ten years of employment, but such moral relativism goes a long way to explain how Adrian got her job. 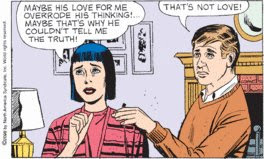 Adrian digs deep inside her psyche to uncover an explanation for Ted's pathological behavior, and what does she come up with? "He is so in love with me that he can't think clearly. He's so ga-ga, words just come out of his mouth without context. Dad, you just don't understand what it's like to be so in love with someone that you just make stuff up all the time." 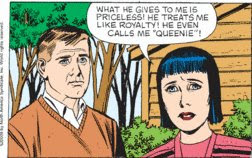 Perhaps one of the most brilliant lines in Mary Worth history. I rank it right up there with "I'll make seafood scampi," and, "I think I'll retile the kitchen floor tomorrow." For me, this was one of those moments that remind me why I read Mary Worth. "He even calls me Queenie." It's like saying, "As dumb as you thought I was, let me surprise you with even more dumberness."

It's hard to know what Ted is thinking here, since he doesn't have any thought balloons. His mind control is so powerful, he prevents even us from reading his mind. However, I suspect he's thinking something like, "$50,000 is a lot of money. But it barely covers my hotel expenses for the past month."

Everyone is a loser. Adrian lost $50,000. Ted lost out on an even bigger prize, thwarted by Adrian's refusal to elope. And the rest of us have lost a month of our life we'll never get back.
23 comments: 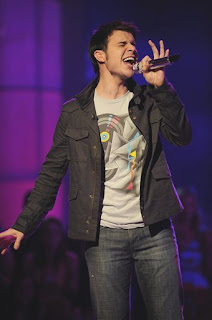 It all started when Jeff got jealous after Mary coyishly dumped him for a guy who wanted to beat his own brother up in a hospital parking lot, and who was later appointed to the Town Council because he was just so darn straight up and likable - like Kris Allen himself. When Mary and Jeff finally got back together, Jeff treated Mary to the "Concert of her choice." And what did Mary pick? You guessed it: that Irish/Czechoslovakian duo Glen Hansard and Marketa Irglova who just happened to be touring through Santa Royale, California, after winning their Oscar. It was only one of the greatest moments in Mary Worth history! You can re-live that moment now:

Email ThisBlogThis!Share to TwitterShare to FacebookShare to Pinterest
Labels: Dr. Jeff Cory, Mary Worth, Popular Culture for the Unpopular 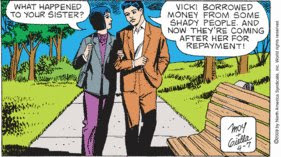 Well, it's been a crazy week in Santa Royale, California. Not only was there a huge amount of face touching, but Ted revealed that his dear sister Vicki owed the mob $50,000. This is a problem for Ted because Ted loves his sister, but his identity (along with his cash) had been stolen by his bookie Arnie. Fortunately, his fiance Adrian is rich and also a sucker. 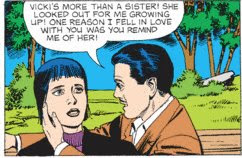 Ted also gave us a great romantic tip. Listen up men. Women can't resist you when you tell them they remind you of your sister. Get her in a headlock and wooingly tell her that you love her because she reminds you of your sister and she'll be putty in your hands. 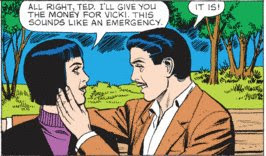 Suddenly, in the middle of their conversation, Ted and Adrian were transported to her living room, where she revealed to Ted that her father was a meddling busybody quite capable of engaging in his own underhanded dealings. Hopefully, for Ted's sake, he remembered to use a fake name when he signed up for that Santa Royal Fan Club Site and hooked up with Adrian.

To accommodate some personal needs, I'm planning to move to a new weekly re-cap format. I can't imagine the posts will be much longer than the daily posts have been since not all that much happens in a week.

In the meantime... Only in the great state of Mary-Land could I have seen this license plate at the local Giant grocery store. 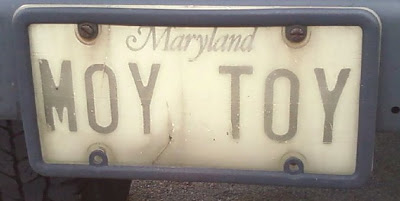 Email ThisBlogThis!Share to TwitterShare to FacebookShare to Pinterest
Labels: Thin Grasps at Reality 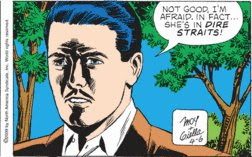 Wouldn't it be Karen Moy's ultimate joke on us if Ted Confey turned out to be everything he claims? But if not, it looks like he's moved on to Plan B: The old Can-You-Help-Me-Pay-My-Sick-Sister's-Medical-Bills routine. What's next? Selling fake purses at the Charterstone pool party?

By the way, I love Dire Straits. In honor of Jeff Corey's background check on Ted, I'm sneaking the song Private Investigations onto the Jukebox until the Condo Board finds out and yanks it for not being the kind of song we listen to at Charterstone.

Mary is the MASTER manipulator. Jeff, the perfect puppet, does exactly as she wishes, and the beauty is he thinks it is all his idea! At first I was wishing I could manipulate my children this well, but it would require that they be idiots... like Jeff's kids. I'll keep the smart kids and take my chances. 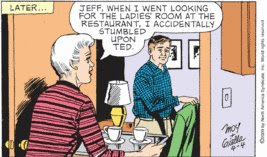 Woah. That is alarming! With that penciled-in mustache, you wouldn't necessarily expect to find him in the ladies room!

Special thank you to Robert for selecting Rock and Roll Waltz for the Charterstone Jukebox for winning our most recent Not-A-Real-Contest contest. 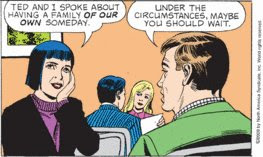 You did? You spoke about it? How wonderful! I can just see an entire brood of little dim-witted science nerds running around with penciled-in mustaches. You must be very thrilled to have had that conversation.
13 comments: 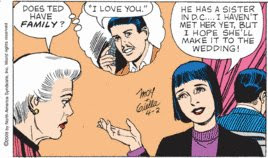 What a relief. For just a moment I was worried that Ted was talking to Grimace. The winning entry in our most recent Not-A-Real-Contest contest, as selected by the Condo Board, is Robert's: "Adrien [sic], have you ever clutched your purse to your chest, like I'm doing, to keep muggers, thieves, and men you're dating from getting their hands on it? Because it's a maneuver you need to learn." Congratulations, Robert, for this tremendous honor! You may submit your Charterstone Jukebox song suggestion to the Condo Board via my email address in the right hand column of this blog. And thank you to everyone who participated.

Fortunately, Mary's question, while taking two days to get to, proved to be quite worth the wait. "Does Ted have family?" Brilliance. Pure brilliance. 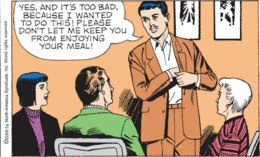 When Ted said, "I really wanted to do this," I thought he was reaching for his checkbook and was actually going to write the pledge, which led me to think that he had been on the phone with Arnie who somehow managed to restore Ted's trust fund. Now I realize he only meant, "I was really looking forward to having dinner with you and telling Jeff I couldn't keep my pledge." I'm sure Adrian will rush to defend Ted's decision to leave, because that's what loyal fiance's do.

I don't mind Ted leaving, though. In fact, I wouldn't mind if he took Adrian with him. And Mary. And Jeff. Then all that would be left would be an empty table. Which would be fine. I wouldn't mind watching the table for a week, maybe even two. That's how excellent this strip is. No matter what happens, it's great!

Yesterday's Not-A-Real-Contest contest set a new record for reader responses, which I couldn't be more pleased with. The Condo Board is deliberating and will hopefully have an announcement made by tomorrow morning.