This morning I woke up thinking, now that Joe Giella has retired, and June is such an excellent artist, maybe I don't need to continue blogging about Mary Worth. Maybe this would be a good time to hang it up. And then June gives us a "Floating Head Shop," and I'm ready to give her a Worthy Award.

Hey, who is this cherubic character without any snake tattoos?


Well, it's official. Uncle Joe Giella has retired. I've never met him, but, oh, how I enjoyed his art. He just seemed like the kind of sneaky, funny guy you wish were a relative... I guess that's why we started calling him Uncle Joe. Anyway, I wanted to showcase some highlights from the last seven or eight years I've been blogging here, but of course this list would be way too long. So here are the Panel of the Year winners from the the Worthy Awards starting with 2008.


But first put a free token in the Charterstone Jukebox and listen to Laura Nyro singing "Goodbye Joe" and enjoy. 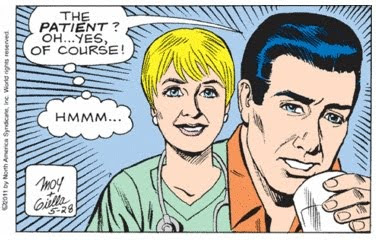 Mary hates those who help themselves.


I didn't have time to blog yesterday, but Rob from Nu Joisey pointed out this distressing Easter egg:

But, alas, it is true. I have added Goodbye Joe to the Charterstone Jukebox.

Email ThisBlogThis!Share to TwitterShare to FacebookShare to Pinterest
Labels: Mary Worth, Thin Grasps at Reality

I wasn't always sure what the delegates at last night's Republican convention were chanting, but I know what the citizens of Santa Royale are chanting:

"Tossing my pills from five inches in front of my mouth -- with my eyes closed! I still got it, baby!"

Thank you Ms. Moy and Uncle Joe for depicting so precisely how I have often felt blogging about this strip! (Sometimes the intensity just overwhelms me.) This panel is a keeper.

I have to admit, today's Sunday dialogue was outstanding in every way. Karen Moy seems to be upping her Sunday game to keep up with this amazing art - I mean, Tommy's hair? Who knew?

Are we still in the Worthiverse? The room hasn't rotated or redesigned itself between yesterday and today. Except for a missing picture, it's exactly the same! I'm going to think long and hard about what this could possibly mean.

This is the second Beadie break up at Jerry's Sandwich Shop, so I'm not sure it's the romantic hot spot everybody claims. But I sure like how they have remodeled! Things are looking much better at Jerry's.

Can Vicodin heal a broken heart? I don't know, but I get the feeling we're about to find out.

Good ol' Mr. Allora got them all moved in today. Of course, Tommy was no help at all, and he looks just fine. I'm starting to wonder if this was all a big ruse to score a few narcotics. At least Tommy's reflection is still in pain.

As someone with periodic back problems, may I suggest, Tommy, that you try sleeping on the floor? It can't be nearly as bad for your back as that couch.

Wow, major spoiler alert: After Wilbur kill's Ian's wife, Tommy is going to shoot him to save him from Ian's mob.

Email ThisBlogThis!Share to TwitterShare to FacebookShare to Pinterest
Labels: Iris Beedie, Popular Culture for the Unpopular

When I see today's strip, I get nervous. Clearly, Joe Giella has upped his game. IPhones with audio and charging ports, believable shadows on people's faces, the stainless steel texture above the food counter, and food that looks almost edible. I worry that someone had a talkin' to Uncle Joe, and that he's feeling threatened and working under duress. It's enough to drive a man to addiction.

I was relieved to see that Mary attended Tommy's exam just to make sure the doctor knew what he was doing. But did she actually stay in the room while Tommy got dressed?

The good news is that Tommy's spiral back to rock bottom, and that beautiful moment when we hear, "My name is Tommy and I've been sober for 30 days," is probably going to take a little while. So pop yourself a big bowl of corn and get ready for the entertainment. 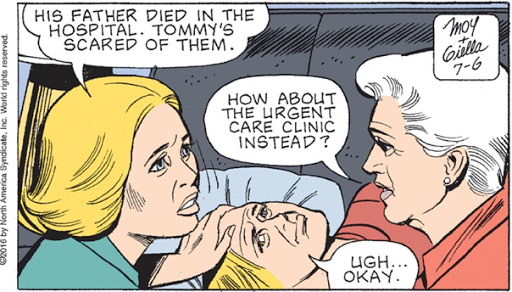 If everyone whose father died in a hospital stopped going to the hospital, pretty soon no one would die in a hospital.
10 comments: 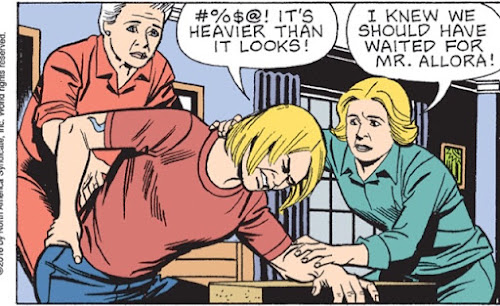 I can't tell you how much this resembles my life right now. Although, I will say that so far, thanks to Mr Allora, my back is doing okay.