Just one more thing these two won't have to worry about...

Leonardo was a genius, but I'm not convinced he was a genius artist. Michelangelo was definitely a genius artist. He was insane. The Sistine Chapel? Three thousand square feet on his back? Mammoth marble statues? There's a cute little quote attributed to Michelangelo saying something like when I see a block of marble, I see the statue inside it, and all I do is chip away until it is free. Something like that. But where did he get the marble? He quarried it himself! It's not like he went down to the marble store like you or I would. He got a team of laborers and they went into the mountains and they risked life and limb for years actually finding the marble and bringing it to his studio a hundred miles away. Over two dozen major sculptures, including the David and the Pietà. Plus some pretty impressive paintings. Did I mention the Sistine Chapel? Oh, and he was an architect with buildings all around Florence and Rome. So forgive him if he isn't all that impressed with Leonardo Da Vinci, the toast of the town, the belle of the ball, and his tiny little Mona Lisa, and unfinished Last Supper. Sure he had genius ideas, but did he actually ever make that flying machine? He was a genius dreamer who could sketch up big ideas. Go dream some big ideas while sitting in the Laurentian Library and explain to me why Michelangelo should adore Leonardo Da Vinci.

"Reminds me of Dave."

Everyone in Santa Royale is so excited about the Painting Exhibit coming to Downtown Museum. They've been anticipating it for months, ever since the Board of Directors announced that the Painting Exhibit's world tour would include Downtown Museum. There are many people in Santa Royale who love looking at Painting. And who better to enjoy it with than the substitute art history teacher who knows a lot about Painters and stuff?

Next time, Harlan, try this: "The rhetorical question is..."

Late night post: I'm perplexed by Dawn in the second panel. Is she placing her right hand on Harlan's knee, or is she just folding it around her waist? In this particular case, I think both. The wonders of the Worthiverse. Exciting times indeed.
14 comments:

So, apparently nothing happened at Harlan's home... Not that I wanted Dawn to get hurt, but I'm also pretty furious that our author may think it is perfectly normal for a young college student to go over to her professor's home alone to practice yoga. Also, I'm furious that Dawn thinks that sandwich looks appetizing.

Disney's 1967 version of the Jungle Book was the first movie I remember begging my parents to let me see. I was three years old. I was mesmerized by the line art in the newspaper ads. I can remember sitting in the theater and enjoying every minute of it, except the ending when Mowgli walked away from his friends to join the uncomfortably pretty girl. I had a story-book record that I read and sang along with, and I turned the pages when Tinkerbell tinkled.

So, naturally, I was a little skeptical when I heard a remake was in the works, until I learned that it was being produced by my lifetime friend, Brigham Taylor. Brigham was the little brother of my best friend, and kept us endlessly entertained with his ability to quote movie lines. I remember seeing the movie Airplane in the 1970's and going back to the Taylor's home where Brigham stood on the kitchen table and reenacted our favorite scenes. He was probably 10.

It's not my place to profile his career without his input since I'd only get a lot of facts wrong, but here's a great interview with him which will give you some of the highlights.

So, of course I had opening night tickets. The theater was packed, and it was one of the most diverse audiences I've ever sat with. Culturally and age-wise, you could see the anticipation for this movie had very broad appeal. And from what I could tell, everyone loved it. There was plenty of applause at the end. I also enjoyed the quiet hum of children throughout the theater trying to coach Mowgli through his adventures. Normally, that might annoy me, but it wasn't disruptive, and it was actually kind of cute.

The movie might be too intense for the under 5 crowd, but I hardly think of it as a kid's movie. When it was over our entire family felt like we'd seen the best movie we'd seen in a long, long time. The story was told so well, and the visual effects were absolutely stunning. We saw it in IMAX 3D and it was almost as if you were inside the amazing jungle created by director Jon Favreau and his talented artists.

Anyway, despite my personal bias for all things Brigham Taylor, I encourage you not to miss this amazing movie. I even liked the ending this time, and sat through the entire credits.

Email ThisBlogThis!Share to TwitterShare to FacebookShare to Pinterest
Labels: Popular Culture for the Unpopular, Thin Grasps at Reality

Actually, this story began March 21 of this year. Only in Mary Worth would a story still be standing still at the starting gate nearly four weeks later.

Conversation is awkward when practicing yoga at your substitute teacher's house. I mean, what should you say? Is it best to lead with your break from dating? Perhaps, but only if you follow it up with a judgmental remark regarding your teacher's grief-filled abstinence. I think that would be the best way to go.
9 comments:

I'm relieved that Harlan's dead wife doesn't look exactly like Dawn, but I still worry about another one-armed Jim story coming on.
13 comments:

Whew! I'm so relieved to know that Harlan Jones is neither lonely nor insane. For a moment I worried that Dawn might be getting herself into some sort of vulnerable situation.

"Yeah, it's a big, private place. Hey, Dawn, how'd you like to earn a little extra money for school? I'm looking for a house cleaner. And someone to walk Alfie for me."

Here's an article on the sordid life of male yoga instructors, just in case you can't get enough of this type of thing.

Some quotes are so good, they need their own t-shirt. Get yours here! 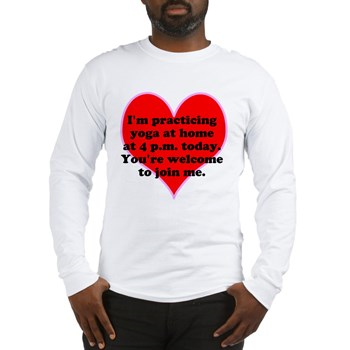 I know the last panel is the money panel in today's strip, but most of our readers don't have access to the splash panels on Sunday and I wanted to share. This is the first time I remember seeing this view of Local University. It really is breathtaking with its mountain peaks towering over the dramatic Santa Royale skyline. And apparently, this is just the gymnasium!

When in Rome... do something really creepy.

This isn't one of those hoiyt-toiyty universities where everyone is formal in a suit and tie all the time. I mean, I wouldn't lecture my class wearing a tie and sweater vest under my suit jacket. Oh wait, yes I would. But this is YOGA! And we wear our jammies!

"No pain no gain. Wherever you are, begin. Boldness has magic in it. A year from now you may wish that you started today.  People with goals succeed because they know where they are going. It don't mean a thing if it ain't got that swing. The rain in Spain falls mainly on the plain."

Dawn, it is not necessary to gesture when you are not communicating with someone. It makes others curious about you.

Oh, sure, it all starts out innocent enough... but then something INTERESTING happens and before you know it, substitute professor Harlan Jones is stretched out on a yoga mat in a green sweat suit imagining he's Michelangelo painting the Sistine Chapel and converts to Catholicism.

And like the rest of humanity, I have interest in only one subject. For me, it is Mary Worth. That's it. And the more wonderful this dialog becomes, the more interested I am. It's inspiring.

It's not as incongruous as it sounds. Da Vinci does make a popular brand of yoga mat:

Boy, if this is what it takes to inspire students these days -- green suit, engaging multimedia -- I'm not sure it's even worth being a substitute professor anymore.